In 2009, having just turned twenty three years old, Deborah Feldman walked away from her insular Hasidic roots. She was determined to forge a better life for herself and her son, away from the rampant oppression, abuse, and isolation of her Satmar upbringing in Williamsburg, Brooklyn. Out of her experience came the incendiary, bestselling memoir Unorthodox.

Exodus, Revisited is the definitive follow-up to that memoir; now updated with more than 50 percent new material, it is the unforgettable story of what happened in the years after Deborah Feldman left a religious sect in Williamsburg in order to forge her own path in the world. In this updated and expanded edition of Exodus, originally published in 2014, she delves into what happened next—taking the reader on a journey that starts with her beginning life anew as a single mother, a religious refugee, and an independent woman in search of a place and a community where she can belong.  The result is greater insight into her quest to discover herself and the true meaning of home. Travels that start with making her way in New York expand into an exploration of America and eventually lead to trips across Europe to retrace her grandmother’s life during the Holocaust, before she finds a landing place in the unlikeliest of cities. Exodus, Revisited is a deeply moving examination of the nature of memory and generational trauma, and of reconciliation with both yourself and the world. 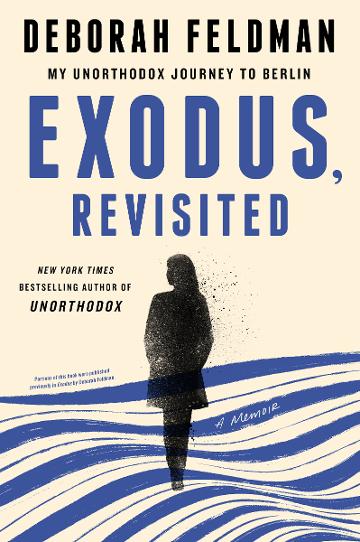 "Intriguing and intellectually satisfying...Across her three memoirs, Feldman is always thinking about her Jewish identity. How can a person who senses herself an outsider find home? How does one fulfill an obligation to one’s forebears and honor generations of trauma? Exodus, Revisited, raises hard questions that are important to many people."   --Washington Post

"Feldman has a gift for making prose poems of small events, such as searching for ancestral data in a Swedish village or meeting people in a Berlin café. Not only is the book beautifully written, but it deals with some of the most profound human emotions: longing to know one’s origins; anger at injustice; and romantic and parental love. Feldman’s analytic mind is particularly keen here, as when she details the complex emotions she experienced while watching the trial of a Nazi in a German court. A barebones description of the storyline doesn’t even begin to do justice to this magnificent piece of literature, which will stand the test of time." -- Library Journal

“The perfect follow-up, delving deeper into what inspired Feldman’s initial decision. Beyond her literal choice, Feldman also considers what it means to be Jewish and to have a homeland. It, like Unorthodox, is a beautifully-written meditation about the very essence of community.” -- Bitch Magazine

"Impressive... An inspiring story of commitment to oneself..." -- Shelf Awareness

“Rich in details of Jewish life and the lives of her grandparents in the World War II era, [Feldman] sensitively portrays the inner struggles of accepting the pervasive feeling of survivor guilt and her own desires to understand the woman she was becoming... An enthralling account of how one Orthodox Jewish woman turned her back on her religion and found genuineness and validity in her new life.” -- Kirkus Reviews